Keystone is based on LLVM, but it goes much further with a lot more to offer.

Find in this Blackhat USA 2016 slides more technical details behind our assembler engine.

We are thrilling to announce a stable release, version 0.9.2, of Keystone Engine!

This version fixes some important bugs inside the core of Keystone, added some new bindings & made some minor improvements. All users of Keystone are encouraged to upgrade to v0.9.1.

In case you wish to upgrade from older version of Keystone, do:

Remember to stick “sudo” in front for root privilege if needed.

We are very excited to release Keypatch 2.1, the award-winning assembler for IDA Pro!

Get full list of new features & source code of Keypatch at keystone-engine.org/keypatch

A quick tutorial for Keypatch is available.

This short tutorial shows how the Keystone API works. There are more APIs than those used here, but this is all we need to get started.

The following sample code presents how to compile 32-bit assembly instructions of X86 in C language.

To compile this file, we need a Makefile like below.

Readers can get this sample code in a zip file here. Compile and run it as follows.

The C sample is intuitive, but just in case, readers can find below the explanation for each line of test1.c.

By default, Keystone accepts X86 assembly in Intel syntax. Keystone has an API named ks_option to customize its engine at run-time. Before running ks_asm, we can switch to X86 AT&T syntax by calling ks_option like below.

The following code presents the same example as above, but in Python, to compile 32-bit assembly code of X86.

Readers can get this sample code here. Run it with Python as follows.

This Python sample is intuitive, but just in case, readers can find below the explanation for each line of test1.py.

By default, Keystone accepts X86 assembly in Intel syntax. To handle X86 AT&T syntax, we can simply switch to syntax AT&T like below.

This tutorial does not explain all the API of Keystone yet.

We are very excited to release Keypatch 2.0, a better assembler for IDA Pro!

Following are the new features provided by this version.

Get full list of new features & source code of Keypatch at keystone-engine.org/keypatch

A quick tutorial for Keypatch is available.

Update: our Blackhat USA 2016 talk was over. Keypatch is now available at http://keystone-engine.org/keypatch.

1. Problem of the built-in IDA assembler

IDA Pro is the de-facto binary analysis tool widely used in the security community. While browsing the assembly code in IDA, we may want to modify the original code to change the behavior of the executable file. IDA offers this functionality in its menu “Edit \ Patch program \ Assemble”, in which we can type in new assembly to overwrite the existing code, as in the screenshot below.

However, this built-in assembler suffers from several significant issues, as follows.

Unfortunately, there was no solution for all the above problems of IDA assembler. We decided to accept the challange, and build a new assembler plugin for IDA named Keypatch to solve all the existing issues.

Our tool offers some nice features as follows. 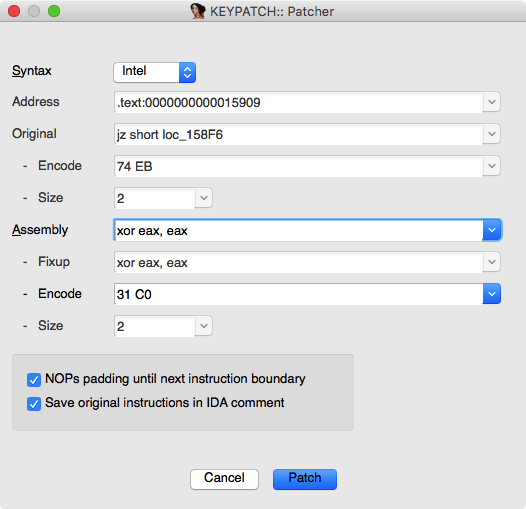 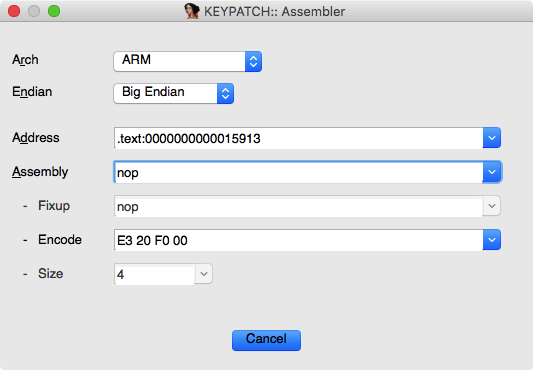 To summary, Keypatch has everything to replace the internal IDA assembler because it can do more, and do better. We believe that this little IDA plugin will be indispensible in your toolset of reverse engineering.

We are thrilling to announce a stable release, version 0.9.1, of Keystone Engine!

This version fixes some important bugs inside the core of Keystone (especially X86 assembler), added some new bindings & made some minor improvements, without breaking compatibility. All users of Keystone are encouraged to upgrade to v0.9.1.

NOTE: Keystone is now available on PyPi in keystone-engine package. This package includes the core, Cmake is required to build the shared library. Then Python users can easily install Keystone with:

See below for the changelog.

We are very excited to announce the first public release, version 0.9, of Keystone Engine!

We would like show our gratitude to all the Indiegogo supporters, who financially contributed to the development of Keystone. We will never forget all the testers for incredible bug reports & code contributions during the beta phase! Without the invaluable helps of community, our project would not have gone this far!

Keystone aims to lay the ground for innovative works. We look forward to seeing many advanced research & development in the security area built on this engine. Let the fun begin!

We are very excited to announce that we already released Keystone source code to some early adopters! Together, we will work hard to find and clean as many bugs as possible before making it public later.

We would like to thank those who are willing to put valuable time & efforts to help us in this phase! Believe us, the code are in good hands right now :-)

This post is to tribute to all of 99 Indiegogo contributors, who helped us to achieve Keystone fundraising goal, thus effectively made this project possible!

Especially, we would like to express our deep gratitude to 4 project sponsors, who made big contributions to our project!

Also find below our heros (excluded anonymous contributors & listed in no particular order).

Our Indiegogo fundraising for Keystone project was successful with 165% funded! Thanks a lot to all the awesome 99 backers, you are the motivation and the very reason why Keystone sees the light of day, and will become available to public soon!

Since our stretch goal was also met, we will have support for GNU Gas & Nasm syntax in the first release of Keystone.

Here is our quick plan:

More update about our project will be shared soon.

We have passed the initial IndieGogo funding goal of $10000 in just 1 week! Thanks a lot to everybody who believed in this project and supported us, you are awesome!

With about 10 more days to go, we decided to set out a stretch goal of $15000 to do support more types of assembly syntax.

Our motivation is that Keystone is based on LLVM, which only supports LLVM syntax. If we only compile simple instructions, we will be fine as we are. But if the code has directives, macros, comments and so on, then the assembly syntax matters because each assembler has different way to express their languages.

If the stretch goal of $15000 is reached, the first public version of Keystone will support GNU Gas & Nasm syntaxes, while leaving the support for other assemblers open through a plugin interface.

Things we must do to support Gas & Nasm for this stretch goal.

When ready, we can enable these syntaxes when setting up the engine, like below.

With Python, this can be done simply like below.

We think the option of freely choosing the assembly syntax is important. Please help to spread the news of this stretch goal, and do back us so we will finally have a nice assembler with full feature when Keystone is released!

We are very excited to launch the crowd-funding campaign for Keystone assembler engine on IndieGogo!

A multi-architecture, multi-platform open source assembler framework is a missing piece in a chain of fundamental engines for reverse engineering. After Capstone & Unicorn, Keystone is the latest of our on-going effort to bring better tools to the security community.

Keystone involves a lot of hardwork, however. Therefore, we hope to have community support via this IndieGogo campaign, so we can push this to the end goal, and all of us can finally have a nice asseembler engine!

Get behind Keystone project, so together we can solve the problem of missing an assembler framework once, and for all: https://igg.me/at/keystone/.

Update: if you do not want to use IndieGogo, we accept donation on Paypal & Bitcoin. All the perks from IndieGogo still apply.

Find how we will update information on the project below.